❧ Welcome to my blog! November is National Adoption Month, so I'm devoting a majority of my blog posts for this month to adoption. My hope is that even if you haven't been directly touched by adoption, you will find the information inspiring and helpful. Please feel free to pass this along to someone you know who may benefit. Also, for the month of November I am donating all of my earnings from Beachbody to Reece's Rainbow, an organization that helps children with Down Syndrome find permanent, loving homes. ❧ 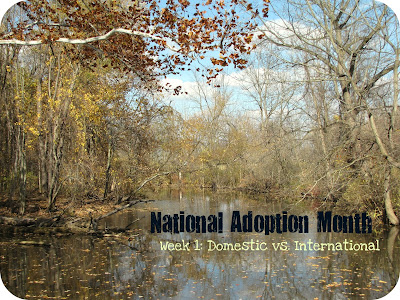 When we were first discerning adoption some 13 years ago, there was a particular incident that occurred while we were growing up that immediately came to mind.  Bob and I grew up in the same small town.  We both remember the "baby Jessica" case.  The family that had to return their toddler to the biological father lived in the town next to ours.  The lawyer that represented the biological father?  Before she became his lawyer we lived on the same street.  It was a case that left a big imprint.  So, even though in our heads we knew how extreme and rare that case was, in our hearts we knew domestic adoption was not a path we wanted to pursue.

International adoption has just always been the logical choice for us.  In fact, way back when I first brought up the word "adoption" it was after seeing an advertisement in the newspaper for an International Adoption seminar.  We went to the seminar and our fate was sealed, we never looked back.  We have always felt strongly that International Adoption was the route God was calling us to following.

The thought of travel can sometimes be a turn off for some.  I don't consider myself an adventurous person and I don't particularly love to travel, but being able to see the countries in which my children were born has been life changing.  Going to Russia or Korea were never on my "to do" list, but I'm so grateful that I have had the opportunity to visit those countries.

I will never forget the seeing the Russian orphanages that either of the boys were in.  The way they looked, the smells, the sounds {or lack there of}, the people.  I have a hard time listening to people complain about how awful our country is when I have seen first hand the way other people live and struggle in other countries.

Every once in a while someone would make a comment about taking care of the children in our "own country".  To which I respond, doesn't every child, no matter where they were born, deserve to have a family?  I think so too.

For some people, like us, it has been a clear cut decision for each adoption.  God is calling us all down different paths and each family is different with a unique set of circumstances.  If God is calling you to adopt, He will make the way clear.

Please be sure to visit Gardenia, Patty, and Grace in My Heart to read their thoughts on the subject.

Grace in My Heart

When Paul and I were discerning domestic vs international, Paul was very uncomfortable with domestic. I was slightly inclined because I wanted a baby. However, Paul made this analogy to me, he said, "Domestic open adoption is like marrying someone you've never met and their whole family." He wasn't comfortable with the "unknowns." In the end, I think his discomfort was more about the Holy Spirit was really leading us not to adopt babies but to adopt toddlers from China. That is where the Lord had our children for us.


Making the decision to adopt, is really about prayer and discerning what God would have you do. Thanks for sharing your experience!

Great post, Jen. I, too, have had that same questions about "Why not adopt from our own country" and that really is an unfair question. There are so many personal factors involved it is not a good question to ask. The decisions, no matter how easy or hard they are to answer, all need to be considered seriously, and until you are going through the process, you may not realize what exactly affects those decisions.

Thanks Gardenia, we're all linked up, sorry for the delay!!

Thanks Patty, so true! All linked up now, sorry for the delay!

Kimberlie, I never thought about that way! I agree that the Holy Spirit really does lead us to our children :)

It is amazing to see how God leads each child to his/her parents through so many different journeys.

Your stories are inspiring. Although I can't relate because God led us down an entirely different path.

We really were set on foster to adopt because of the financial aspect. We were certified/home study approved to adopt through the state. Ready for a baby/toddler or sibling group. Then, God decided that His Plan for us was different. Both of our children came to us through open domestic infant adoption...without our direct seeking. We had to rush to get our private home studies done (after they were born) in order to bring our children home. These children were meant to be part of our family from all eternity. And because of that, God planned out that our families and our children's birth families would be forever linked. We LOVE open adoption for our family. I know that it is not for everyone, but it is an amazing blessing for us!!

We were also terrified of the unknowns of open adoption and were not planning on pursuing domestic open adoption at all. BUT GOD HAD OTHER PLANS. He led us to each of our children through open domestic adoption. They were meant for our family for all eternity. Because of this, He knew that our families would be forever linked with our children's birth families and worked out all the details of this to be a blessing for all involved.
God works out the details for each family no matter how their children join their family. That is the beauty of adoption!

Great posts! I also really like all the comments. Very informative. My niece recently adopted three children (sibling group) domestically, but it is not an open adoption. It is interesting to see and hear how the Holy Spirit works in each family as they make their decision.